In many different types of software, face recognition plays an important role. Typically, the recognition process includes the following steps:

During the development of face recognition, there are three milestones.

The main idea of eigenfaces is to project high-dimensional face features into a lower-dimensional vector, and then classify images with low-dimension vectors.

Eigenfaces is a set of "general faces". Theoretically, any face can be regarded as a weighted sum of eigenfaces, for example,

In the eigenface method, we find that faces, of the same person, under different illumination conditions, can be looked very differently. That makes the method vulnerable to illumination variations. To tackle the problem, researchers designed several features to extract from images and use these features as low-dimensional vectors to compare. One of which is Local Binary Pattern (LBP). Theoretically LBP can avoid the variations in different light conditions.

The extraction of LBP feature works as below:

Ideally, the influence of light, on a small patch, will perform similarly on all pixels. i.e. In different illumnation conditions, every pixel in a same patch will (ideally) add a same constants $c$. As seen in the above process, it won't change anything. Experiments showed that LBP and other hand-crafted features work better than Eigenface method. However, in real life, the assumptions should be carefully examined.

I am not going to introduce vanilla neural networks. Please let me know if it is needed. I'd rather describe some important improvements of CNN over other techniques.

Neural networks are designed to perform tasks by taking examples and exisiting data. In designing a neural network, we need to know what kind of architectures fit our needs and our optimization goals.

Convolutional neural network is a deep learning architecture, which usually works on images.

Convolution layer is the key component of CNN, which computes and extracts the convolved feature from an image. For example, assume we have a local region of an image as a $5\times5$ matrix, and we have a kernel $(1,0,1;0,1,0;1,0,1)$. 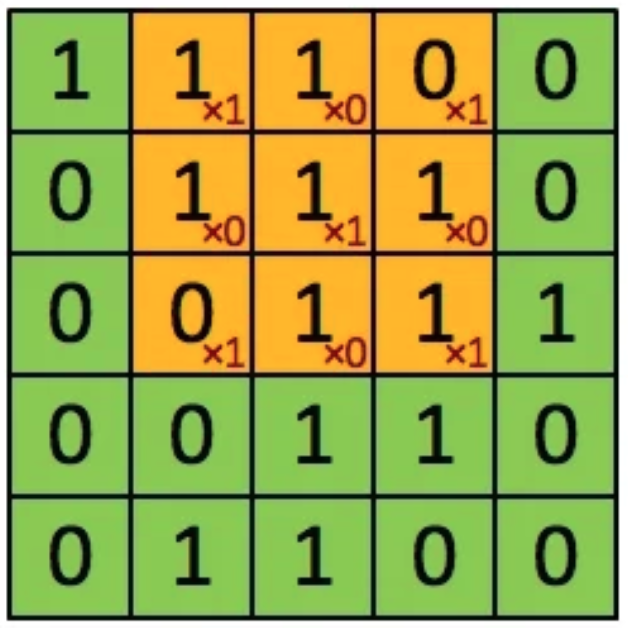 We can then calculate the local convolved feature as 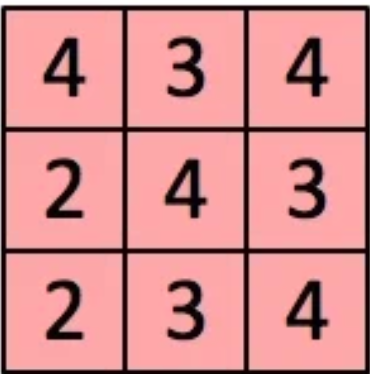 As we seen in the above process, CNN uses local operations, which performed on local pixels. With the previous knowledge we know the neighboring pixels are more important for a single pixel rather than a random pixel on the image. Thus it is very useful to compare pixels in local regions, rather than the global. The nature in convolutional neural network followed the pattern of images and is the architecture that we want. Besides of this nature, it is also more efficient than fully connected networks as it shares weights along many different neurons.

In face recognition, we want the output of our network to be a vector that satifies: